Route of the water

The walk starts from the “Abrevadero de la Harinera”, a good access point from the roads of Algarinejo.  Travel along the route to the river Turca where the lane narrows to 1-2m wide, here you arrive at a spring known as the “Cascada de Zurreón”, which runs parallel with a stream of the same name.

Also, close to the river Turca there is a lane heading east towards a bridge that crosses the river, after which the walk gradually inclines to the “Loma del Moro Santo”, close to the main road.  After passing through the “Arroyo de Zurreón” and following the “via pecuaria” or drove, a path used for transporting livestock, your journey ends at the “Cruz de San Sebastián” where you can join up with the Route of shepherd.

The steep, high sided slopes and the scenic mountains of Algarinejo are an example of a rugged limestone landscape, which is Jurassic in origin.  Gullies, precipices and pools occur in deep ravines such as the Rio Turca and especially the “Arroyo de Zurreón”.

This is a very interesting site for observing reptiles and amphibians e.g. ladder snake and common frog and especially for bird watching, as many types of birds arrive in masses covering the mature trees, like the great tit, the Chetti’s warbler and others such as the common nightingale, blue tit, spotted flycatcher etc.  The presence of forest mammals e.g. martens, genets and smaller birds of prey e.g. the common kestrel also bear witness to this.  The barbell is the dominant species of fish which uses the river Turca for spawning.

Between the streams and ravines of clear water lies typical andalusian country architecture, like the urbanization “Peñón”.

The “via pecuaria” that crosses from “Arroyo Zurreón” to the “Cruz de San Sebastián” was the main route for moving livestock by the local farmers and is of great historical importance in Algarinejo.  Various bridges from the medieval period like the “Puente Hundio” were used for the movement of livestock looking for fresh grazing, at the same time fulfilling the function of tax collection from the crossing farmers.  Drinking troughs and resting areas were provided along the way for the seasonal migration of sheep and cattle and were well used between the best growing areas.

An intricate system of irrigation channels and small reservoirs created during medieval times supported the highly productive small holdings of the area of “Arroyo Zurreón”.  Fig, pomegranate and centenary walnut trees grow in an environment where the Muslim influence is considerable.  These species are characteristic of the medieval systems of agriculture.  The centenary walnut trees of this landscape are a legacy of another traditional activity: the tanning of hides, which required the use of the walnut tree pulp, in the “Cortijo La Tenería”

Some of these routes are available in Wikiloc, and even variants of them. To do this, you can search and download the desired route through the application.

We offer you the download of the application for Android and iPhone devices.

Routes of trekking and tourism cycle 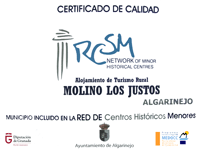 We use own and third-party cookies to improve our services and show you advertising related to their preferences by analyzing their browsing habits. If you continue browsing, we consider that it accepts its use. You can change the settings or further information in the "More information".
More information Ok Decline